The negative impact of the counterfeit threat has hit OEM and EMS companies hard. For many, cost reduction through clever sourcing is no longer an option as it is deemed too risky. How did this happen?

I started out in the electronics business 32 years ago serving my time as an engineer in the Aerospace sector. Much later, when I joined one of the world's largest Franchised Distributors in 1999 I began to realise that every company I dealt with had a few "brokers" up their sleeve. This allowed them to make PPV or savings on their BOM cost. At the time, nobody considered that there was a risk to their product or brand by buying from non-franchised distribution. In all reality there was no risk. Back in the olden days (as my children like to say) brokers were operating in small networks each connected via a Rolodex (if you are under 50 years old, google it). These networks connected to legitimate OEM and EMS companies that bought direct from manufacturers or Franchised distribution. This created an inherent safety as everyone knew each other and operated in a circle of trust.

The supply chain changed quite suddenly with the rise of the internet, creating Global markets, closely followed by China joining the WTO in 2001. Over the next 5 years the industry, slowly at first, began to realise that there were unscrupulous brokers, at the time mainly in China, that were prepared to recycle and remark used parts and pass them off as new. The best brokers quickly adapted to learn how to mitigate this risk with better inspection procedures and stricter supplier approval processes. These brokers differentiated themselves and became known as Independent Distributors and continue to offer a fantastic service to companies Worldwide.

The brokers you rely on to help us out when you have a shortage are operating in a shrinking market place. As mentioned at the top of this article, OEM and EMS companies are not using Independent Distributors to save money anymore but they do expect them to be there when they have a production line down. Many Independents are slowly dying and will not be there for you in 5 years time.

We are now living in a time where the counterfeiters have become more sophisticated. We are now hearing reports of clone devices. These are devices that have not been tampered with like a remarked product but are built in the same way as the original product with the same equipment and could be physically indistinguishable from the genuine product inside and out. We are being told that these will work and function exactly as expected. Some companies claim to be able to prove, through electrical testing that these devices are fake. I find this hard to believe. If the sophistication of these fakes is so good and these parts are so close to the original that microscopy of the silicon die (the circuitry) cannot detect the difference I don't believe that electrical testing is guaranteed to find the best fakes either. This process may find poor quality fakes but do you really want to risk using good fakes?

Component Sense have operated as a proud Independent Distributor and have worked tirelessly to stay at the very top of the quality tree. Our evolution began in 2005 when we attended the ERAI conference in Las Vegas and learned about counterfeit parts. We continued to evolve by dropping sourcing completely as far back as 2007 to reduce the likelihood of receiving poor quality parts. We now only buy from large OEM and EMS companies that can provide traceability on their stock. 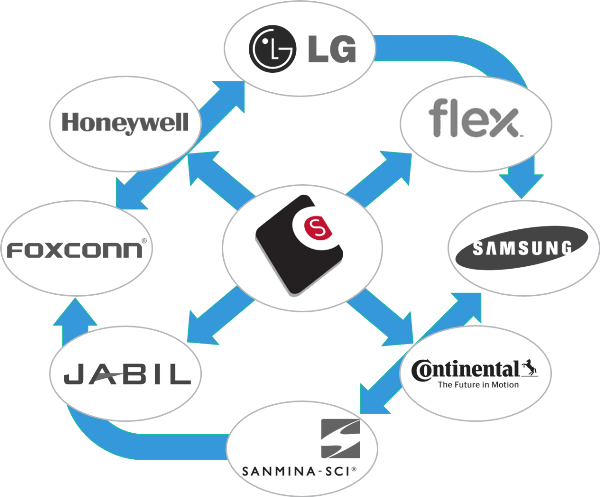 Back to the future

BOM cost reduction with the security of full traceability.

Traceability and very strict procedures ensure that we can confidently offer a "100% counterfeit free" guarantee.

Read our recent blog article The Argument for Traceability and Testing of Electronic Components for further information.

Another interesting read is the ERAI awareness timeline which tracks the anti-counterfeit measures in the industry since 1986 to present day.

By navigating, clicking on any link on our website or Accept, you agree to the use of cookies and other technologies to process your personal data to enhance and personalise your experience. Learn more