Angharad Storrie, Business Consultant, talks to Kenny McGee, CEO of Component Sense, to understand how the business maintains its integrity as a legitimate supplier in a world of increasingly sophisticated counterfeit operations.

AS: How does Component Sense maintain its integrity as a legitimate electronic component supplier?

KM: Firstly, we only source product from very large OEM and EMS companies with very strict buying procedures. Typically, these companies directly buy in the same product that any franchised distributors are buying, but in bigger volumes. Essentially, our stock comes directly from the factory via these large companies, so we have full traceability. I believe this gives us the best protection against counterfeits we could ask for.

Additionally, we have our own robust counterfeit mitigation procedures, and everything that we receive is carefully inspected. Our staff are trained in counterfeit detection and we use the latest equipment available.

There were reports of counterfeits getting into the marketplace as early as 2001, but it wasn’t until 2005/6 that we first came across some very crude examples of counterfeit products. The label markings were nothing like the original, so if you have any familiarity with a particular brand, you would immediately recognise that the label and/or packaging looked wrong - you knew it was wrong before you had opened it up. 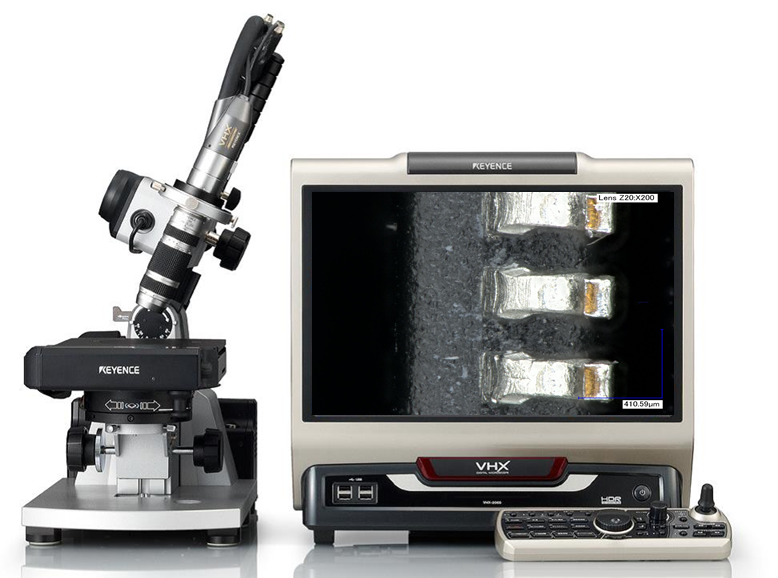 The counterfeit components themselves were also very crude. In 2005, an acetone test alone was enough to capture every counterfeit that came through the door. However, counterfeits have become increasingly sophisticated since then, with different materials being used for blacktopping (covering the top surface of the component), making them far more difficult to detect. Nowadays a variety of chemicals are used to help detect counterfeits, and you have to go through a procedure to try each of them, as they each contain unique solvents which break down the different blacktop materials. There is not one solvent that works for them all, so the process has become much more complex and laborious.

Counterfeit detection is a game of cat and mouse, where the detectors are constantly improving their processes to try to stay ahead of the counterfeiters ever-evolving techniques. Using the latest counterfeit detection methods is just the beginning of the process. At Component Sense, our warehouse staff attend workshops to keep abreast of the latest counterfeit technologies so that we can stop counterfeits in their tracks. To some degree, you are chasing your tail, which is why there is a fear of buying product from the grey market. This is why we believe our supply chain is our number one asset in the battle against counterfeit. We only source our components from large companies that we trust and that know where the product originates from; having traceability all the way back to the manufacturer is the most solid counterfeit mitigation policy that we could have.

AS: Counterfeiting operations are getting more sophisticated around the world. What are the risks of receiving counterfeit products into the manufacturing supply chain?

KM: If you are a PCBA manufacturer and inadvertently buy counterfeit components, you are risking the integrity of your product. That product could hit the marketplace with a potentially inferior device within it, which might result in early failure and recalls. The severity of the risk depends on the type of product that the counterfeit is going into; for instance, you can imagine the potentially life-threatening consequences if used in the automotive industry or by the military. I would not want to be travelling in an aircraft that has counterfeit components within its radar, control or navigation systems. The consequences are horrendous and absolutely must be avoided at all costs.

Furthermore, if all of your product had to be withdrawn from the marketplace and returned for repair, the costs would sink a lot of companies and is not worth thinking about.

As a re-seller of components, the impact of supplying counterfeits would be devastating for our business. As the CEO of the company, I could end up in prison. We have seen a lot of recent examples where people have received lengthy prison sentences for selling counterfeits, although there is obviously a big difference between knowingly selling counterfeits and being implicated accidentally.

Our buying processes protect us however we can never be complacent. There have been occasions where the large companies we buy from have inadvertently bought counterfeits, and their stock could theoretically end up in our supply chain via consignment or outright purchase. We mitigate this risk by carefully examining all of our incoming stock to such a degree that we are 100% confident that we are complying with the regulations and protecting our customers.

As CEO of Components Sense, the world's marketplace for redistribution of component stock, it is my responsibility to protect my customers, my employees, and ultimately myself, from the consequences of supplying counterfeits. If something were to go wrong, my livelihood and liberty would be on the line. The ramifications are huge for everyone, and we have to do all we can to ensure that we are clean and that our customers are safe from risk. To achieve this, we go out and consult with our customers and spend time training them as they are often naive to the threat.

AS: What are the benefits of using a legitimate supplier?

KM: There is a myth perpetuated by some aspects of the media, and often fuelled by the protectionist behaviour of some of the franchised distributors, that independent distributors are the source of counterfeits. In reality, there are many excellent suppliers in the independent market place. We know that because we supply most of them with fully traceable stock. Many are worthy of their status as trusted suppliers, and do a wonderful job of holding their supply chain to account.

There is the grey market, which used to be known as the ‘broker network’. There is also the independent market, which was effectively created when large companies let go of their staff during the downsizing trend of the 90s and 00s. Many manufacturing companies outsourced most of their buying that couldn't be managed by an MRP system. Collectively, the brokers and the independents are a legitimate group of suppliers that can help you out of a hole in the manufacturing business. Every manufacturing business that I have encountered works with some brokers and/or independents. This is essential because these suppliers have an expertise that does not exist in-house anymore; it is a crucial part of the supply chain and should not be discounted.

Since 2001, counterfeits have gradually started appearing in the market place and the pace and sophistication has increased over the years. However, counterfeits are the black market, which is illegal. They are not the grey market. It is important to differentiate between the two, as there is tendency to lump them both into the same category. Grey is legitimate and should be perfectly safe if managed properly.

There are some excellent independent distributors out there, and if you are in manufacturing, you will already know who they are.

AS: Can you give any examples where Component Sense has come across counterfeit products and what was the outcome?

KM: The first counterfeit components we encountered were bought from a company in Israel pre-2007. At that time we did a little bit of sourcing for some of our preferred (manufacturing) suppliers. I don't believe our supplier knew they were selling counterfeits but it was clear that they didn't have a solid supply chain.

Another example sticks with me because it was quite painful! We suffered a $20,000 loss - not a huge amount of money, but for a small business at the time it was basically cash out of my pocket. When we received the product, it was quite obviously counterfeit. In those days, we carried out a fairly simple inspection that alerted us to the fact that the products were not as they should be. This particular part was a Texas Instruments (TI) part, which should have been branded ‘BB’ for Burr-Brown. Burr-Brown were bought over by TI, but TI continued to brand the parts Burr-Brown for a long time after their purchase. The suspect components we received were marked 'TI', which we instantly knew was wrong. We had naively returned the stock to the supplier as requested, and they refused to give us a refund. We lost $20,000 and because we had returned the stock, and no longer had any evidence to pursue the matter through legal channels.

That was my first tough lesson in counterfeit detection. Although I learned the hard way, the experience really heightened my interest in counterfeit avoidance, which has continued to this day… so in that sense, it was worth it!

In October 2007, we made a conscious decision to pull out of the sourcing market completely because we felt the risk of counterfeits was too great. Sourcing did not provide our customers with the level of traceability and protection that we wanted to provide. Since then, we have developed the only marketplace that facilitates the re-distribution of fully traceable, excess and obsolete stock.